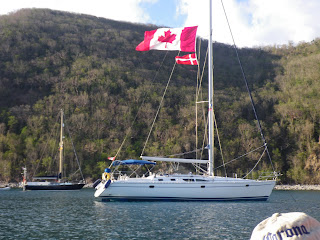 We left port early the day before yesterday, heading out for the crossing to Guadaloupe and Deshaise. The water was capped in white and choppy as we motored and then sailed. The winds got up to an average of 20 knots and actually hit 28, with the boat travelling up to 8 knots, and we flew across in record time – 6 hours, although not without casualties. Once before, Caroline had gotten seasick but yesterday it was, unfortunately, my turn. So I spent much of the time drowsy with Gravol and lying on one of the benches in the cockpit. There wasn’t much to see, since we were out in the open ocean for much of it, but I did manage to pull myself together and help pull some of the sheets as we neared Guadaloupe.

We saw flying fish, small silver jewels, leaping out of the water into the air and gleaming there for a second in the sunlight before they fell again into the bright blue waters. There were tales of them jumping into boats or into the sides of boats and speculation on what might be chasing them underneath the waves to make them leap that way.

Once we anchored and ate a quick lunch, we took the dingy into the town of Deshaise, a picturesque little place with an old church, whose spire you can see from the water. A woman waved to us from one of the other boats, telling us the Customs office was closed, since it was only open from 1-2 and it was nearly 3. We went anyway, with Yvon and Caroline walking up the hill to the office while the rest of us looked around the tiny town.

People’s voices had a different music here, a different accent, French instead of strictly Caribbean. A lot of the shops were closed for ‘siesta’ so Dan, Hayley, and I couldn’t do a lot of shopping – probably just as well. We did, however, find the all-important grocery store and get some ice creams to eat while we walked around the rest of the town. After meeting with the others, we got provisions and took them back to the boat with the dingy. We had a lovely dinner sitting on the deck of the boat and watching an amazing Caribbean sunset. This is the life!

That night, while we all lay warm in our beds, the winds blew, and the ship rocked back and forth. Suddenly it was raining – big heavy drops coming in the vents above our heads. I popped up out of the hatchway to pull my roof closed, naked in the darkness. The cool rain sluiced along my warm skin and it felt wonderful. For a split second, I considered jumping up onto the deck and letting the rain wash me down. No one probably would have cared – people are showering naked or topless here on the backs of their boats – but everyone was up on the surrounding boats, battening down against the rain.

Yesterday we came into Basse Terre and tried to get to the marina. It was full and the depth gauge went to zero before we decided to leave and anchor at a nearby beach with other sailboats. On the way here, though, we stopped at Pigeon Island and Carolyn, Hayley , and I went snorkeling. There were brain coral, tubular coral, sea fans, and lots of beautiful fish, including parrot fish and other fish of various shapes, sizes, and colors. It was amazing! I was smart enough to wear a long sleeved shirt so I didn’t burn my back while in the water but apparently didn’t have enough sunscreen on the backs of my upper thighs so am having a ‘no sun’ zone there for a day or two.

The crossing yesterday was amazing with the gusts getting up over 40 knots and the rail dipping into the water as we heeled well over. Very exciting! Everyone is getting more familiar with the boat and the way she works. For much of the time, I stood on the foredeck beside the sails, moving my body to adjust to the movements of the boat. I stood feeling the wind against my body and the sun through my clothes, in panting ecstasy, like a dog with its head out the car window. When I am in the moment like that, I am perfectly happy. 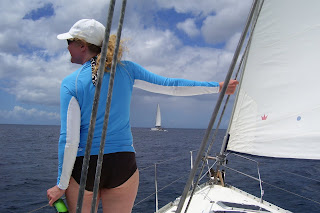 At anchor, Dan and I raised a huge Canadian flag, along with a smaller (but not small) Danish flag below it. The flags are Dan’s but, since we share a Danish heritage, I have adopted them as well. The night before last, we were in a Scandinavian contingent, anchored amongst boats with Swedish, Norwegian, and Swiss flags. Last night, when we raised the flags, our neighbors started cheering, “Yeah, Canada!” There are lots of Canadian flags in evidence here.
Next stop, Iles de Saintes and then on Dominica!
Posted by writer girl at 6:23 PM