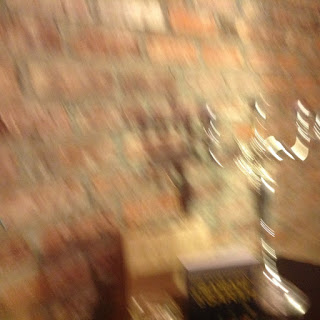 This is a post in response to a photo writing prompt from New West Writers. Alright, it's from the photo writing prompt that's already been replaced by a new one on their site - http://newwestwriters.com/. But I'm not going to let that stop me! The idea is to write about where the photo (or someone else's story about the photo) takes you. So here goes....

I'd walked 30 km today, a new record for me! I'd claimed my bed for the night, put on the 'clean' outfit from my pack, and hung my only other clothes up on the line after washing them, along with myself, in the shower. I'd already been to the local restaurant (maybe the only restaurant in this tiny picturesque town) serving the 'Pilgrim Menu'. I'd eaten dinner at 7, ravenous, and ridiculously early for the local Spanish population. But it felt late for someone like me who'd found myself wide awake and sneaking quietly out of the albergue at 6 a.m. so as not to disturb my few fellow pilgrims who were still sleeping.

For dinner, there had been the usual choices of starter (salad), entree (fish), and dessert (fruit). And, of course, the requisite glass of wine, which in this case, came in a large beer stein. It was wonderful wine, a rich, red rioja that slid down my parched throat far too easily and, to my surprise, I finished it all. My fellow pilgrims, Dietrich and Alexandra, enjoyed their dinners too and suggested we end the evening visiting the local church, which was holding a gathering of pilgrims where we could pray together for a continued safe journey. I declined, saying I needed to go to bed after such a long day and the meal. Not to mention the wine.

But Alexandra wouldn't hear of it. We'd walked together for part of the day, we three, and she was insistent that we should go together and receive a pilgrim's blessing too. Let me just say that, on the Camino, your fellow pilgrims become your family. And I couldn't very well let family down, could I? Despite my misgivings, I wandered to the church with them and went in. It was a beautiful old brick building, small, but beautifully decorated. Along with the other twenty or so pilgrims, we took our seats. The priest spoke mostly in Spanish, exuding good will and beneficence.

The small church was hot, despite the evening hour. The meal and my fatigue made me sink, boneless, onto the hard wooden bench. The wine in my system whispered sweet coaxing nothings and I soon found my vision blurring, the candlestick on the altar becoming nothing more than a metallic glow in the dim light. My head sunk slowly down onto my chest and, until I found myself lying sideways across Dietrich's lap, I knew no more.
Posted by writer girl at 6:03 PM